Tattoo removal has gained in popularity in recent years. Especially with newer technology and devices, procedures are more effective now than ever before. According to the American Society for Dermatologic Surgery (ASDS), nearly 69,000 laser, light, and energy-based tattoo removal procedures were performed by ASDS dermatologists in 2016 alone. Interestingly, various reports have shown rates of tattoo regret to be between 16% and 25%. And according to a recent survey, about 21% of those with tattoos were interested in having at least one of them removed. Because of this, it is no surprise that the media has continued to cover the new advances in tattoo removal.

The DeScribe Transparent PFD (perfluorodecalin) Patch was cleared in 2015 by the Food and Drug Administration (FDA) for its use as an accessory in laser tattoo removal procedures using the 755nm Q-Switched Alexandrite laser. In 2017, the FDA gave the product further clearance to be used in conjunction with various other types of Q-Switched (532, 694, 755, 1064nm) lasers as well as the picosecond (532, 755, 785, 1064nm) laser.

In using this product, practitioners first clean the skin and then numb the area by injecting lidocaine medication. Patients may experience mild discomfort with the injections before the area begins to feel numb. Next, the practitioner applies liquid PFD and covers the area with the DeScribe Tattoo Removal Patch before beginning to treat the tattoo with the laser device.

The DeScribe Patch provides a physical barrier that protects the epidermis from thermal injury by absorbing the heat from the laser. The special properties of the material also reduce optical scattering of the light to allow for deeper tissue penetration. Ink particles can now be broken up at greater depths in the skin without damage to the superficial layers. The DeScribe Patch also allows for higher laser fluence settings, which can target traditionally stubborn ink.

For laser tattoo removal procedures, several treatment sessions are typically required and can frequently reach over 10 office visits. Each session is usually spaced about 4 to 8 weeks apart, meaning complete tattoo removal can take place over a year with treatment. With the new DeScribe Tattoo Removal Patch, multiple laser passes can now be tolerated in each of the treatment sessions, which reduces the amount of necessary office visits. Up to 4 times as many passes can be completed in each session. The patch has also been shown to cause faster healing times, decreasing the amount of time needed between treatments. This new technology paves the way for a more rapid method of tattoo removal.

Expect the popularity of the DeScribe Tattoo Patch to continue to spread to both consumers and practitioners. This new product may significantly cut down on the time needed for tattoo removal.

About the DeScribe Tattoo Removal Patch:

The Describe Tattoo Patch is a single-use, optical clearing device accessory for use with a 755 Q-Switched Alexandrite laser for tattoo removal.  As a physical barrier, the DeScribe Patch may protect the epidermis from thermal injury by allowing heat absorption by the silicone patch (1). The Patch allows up to 4x as many passes in each treatment session versus without the Patch (2†). It allows higher laser fluence for targeting more stubborn ink (1†) and reduces light scattering which allows for deeper penetration (1†). Less injury can translate into faster healing times. Faster healing times can translate into reduced time between sessions.

† Compared to treatment without the Patch.

If you liked this article, you may also enjoy
TATTOO REMOVAL

Tattoo Regret Doesn't Have To...

What is the Cost of Laser...

Tattoo removal, also known as laser tattoo removal, is a nonsurgical procedure used to remove unwanted tattoos. Lasers can break down the tattoo ink, which is then absorbed by the body. To remove a tattoo completely, multiple sessions are necessary in most cases.
RELATED BEFORE & AFTER 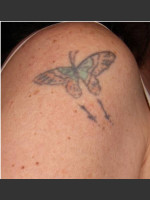 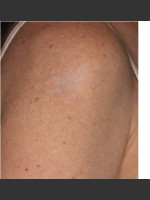